Often times in chess you will see a beautiful sequence of moves where you wish with all your might that your opponent cooperatively follow it. This is one of the times where my opponent did. 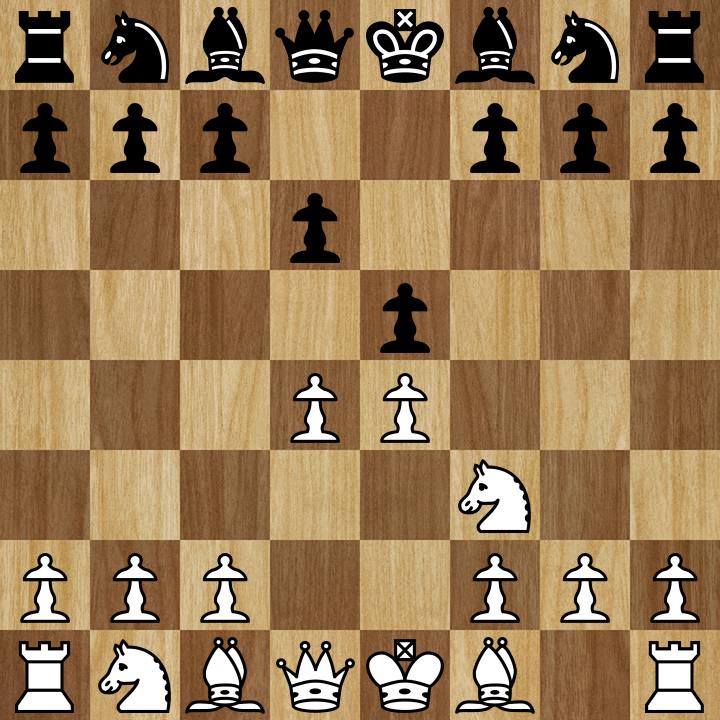 I've come prepared and carry on with my usual plan 3. d4 exd4 4. Nxd4 - Philidor Exchange Variation. 4...a6, guarding an invasion on b5. No matter, that was never my intention anyways. 5. Nc3 Nf6 and I make a similar prophylactic move 6. f3, adding protection to the e4 pawn and preventing an intrusion on g4. 6...d5 to open up their dark squared bishop and I lash out with 7. Bg5, pinning the knight. 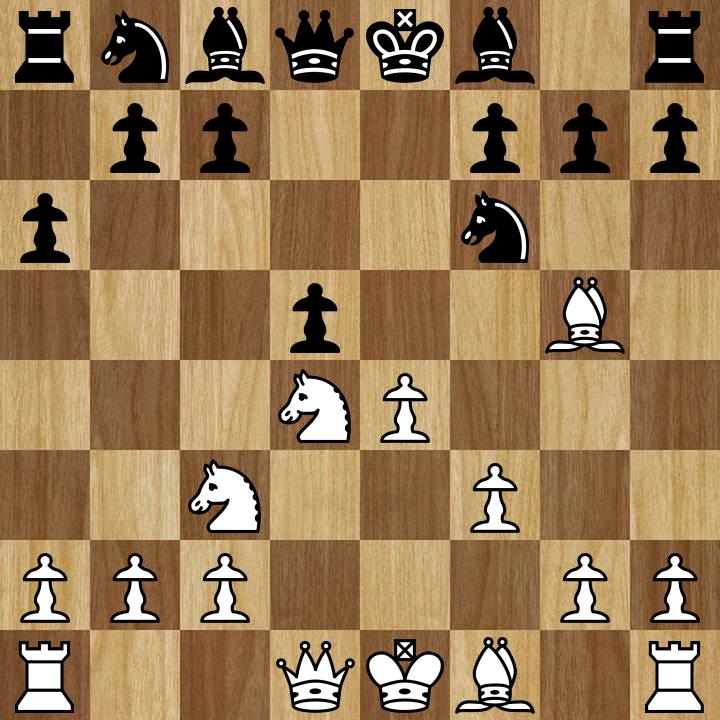 My opponent doesn't like this and follows with 7...h6 to question my bishop's intensions. Here I decided to trade, with the idea being if 8...gxf6 then they've ruined their kingside pawn structure along with any hopes of castling kingside, or 8...Qxf6 in which case 9. Nxd5 winning a free pawn and attacking the queen, winning a tempo. The opponent chose the latter option and moved their queen to the safety of d6.

I respond with 10. Nf5 with the idea of attacking the queen again and start intruding on my opponent's space. 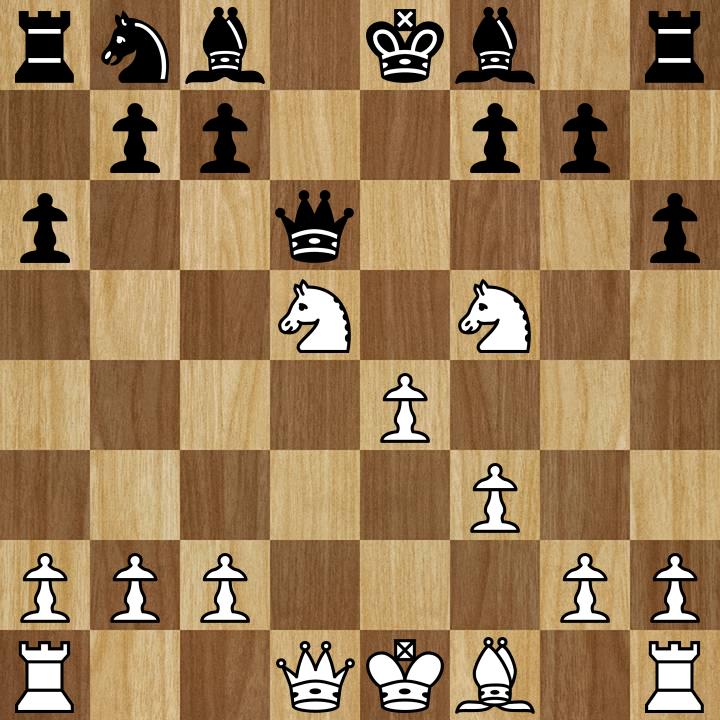 However what I did not see was after 10...Bxf5 11. exf5 there is 11...Qe5+ and my king is looking quite vulnerable. Instead of sacrificing castling rights I block with my bishop 12. Be2, but the engine doesn't like this - from what I can tell it would rather I meet the threat up front and dare a trade as opposed to volunteering the bishop for a pin. I tend to prefer holding onto my queen unless I see some form of compensation in a queen trade, but I'm by no means a highly rated player so what do I know? 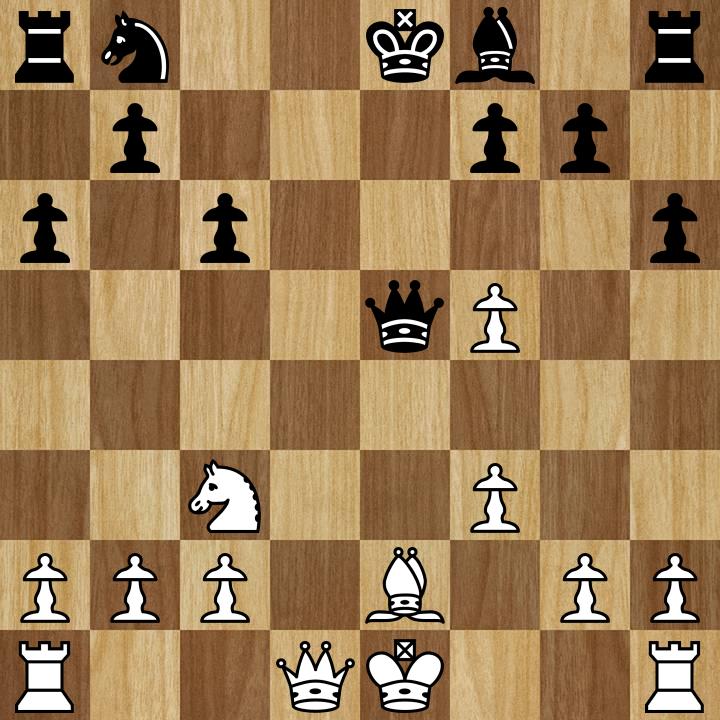 13...Bd6 a developing move and enabling short castles, though the engine prefers 13...Nd7 here enabling long castles and bringing the rook onto the open d-file. I was on the same page as the engine here with 14. Qd3 O-O 15. O-O-O and I have a lethally stacked queen and rook on the open d-file. 15...Rd6 to defend the bishop and we got ourselves a standoff in the center of the board. 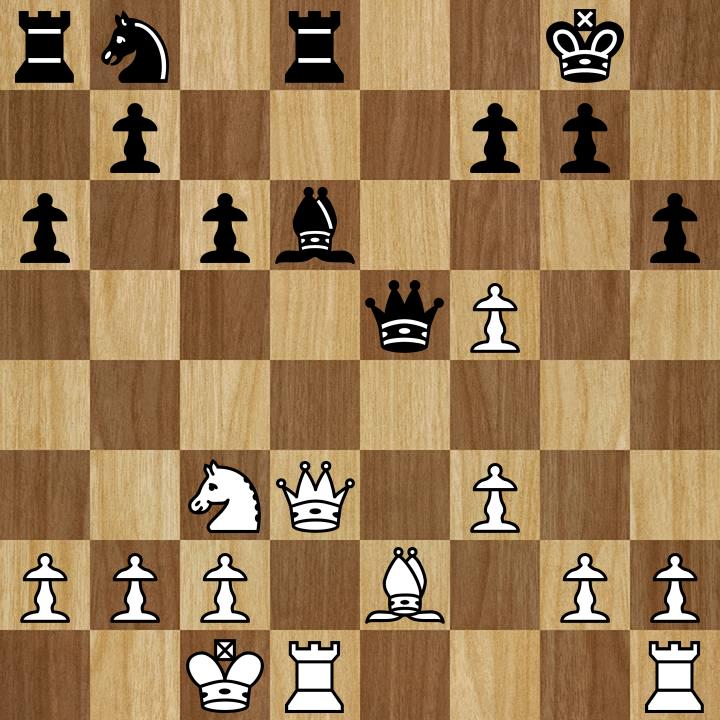 Fearing a discovered attack on my queen and not feeling super confident in my position (though the engine puts me at +2.26 here) I offer a queen trade with 16. Qe4??. The engine really doesn't like this and considers it a blunder, though following the line the engine sees I feel "blunder" is a bit strong of a phrase as no material is lost and I end up +1.05 after the sequence.

My opponent is not interested in this and retreats their queen to 16...Qf6. Noting my opponent's undeveloped queenside, a vulnerable looking king, and the opposite side castled position, I begin a kingside pawn storm with 17. g4. My opponent unafraid follows with 17...Qg5+, and I retreat my king to the safety of 18. Kb1.

At this point my opponent too realizes his queenside pieces are sleeping but unfortunately for the knight the usual c6 square is occupied, as is a6. 18...Nd7 is not possible because it cuts off vision of the rook on the bishop and subsequently loses it. 18...c5 to open up c6 is also not possible because of 19. Qxb7 and either the rook, the knight, or the bishop are in trouble. This is a fun variant so I'll show it below. 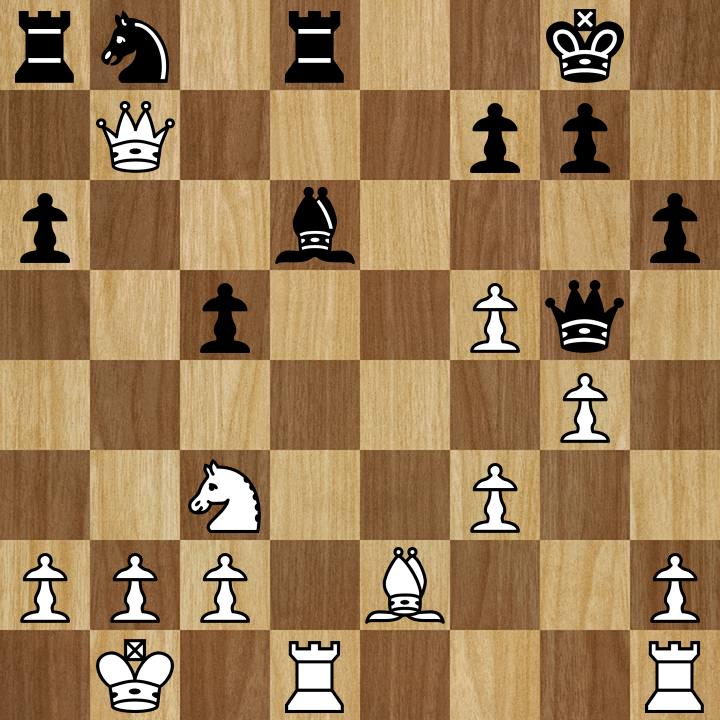 So instead my opponent plays 19. a5? with the idea to develop the knight via a6. But here the engine sees a line I missed, which I'll reproduce from the below starting position. 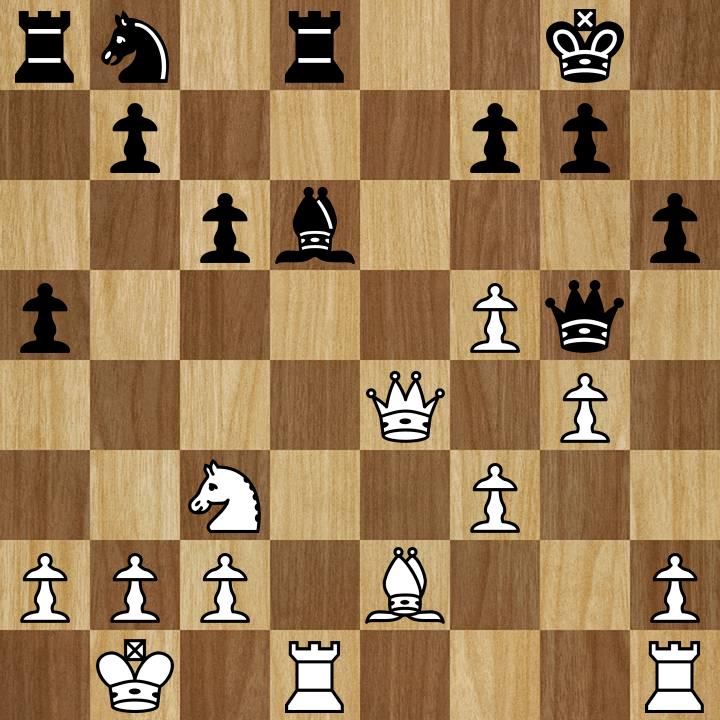 The line goes 19. Rxd6 - a seemingly bizarre move to trade a rook for a bishop. Black must respond or risk losing a bishop for free, 19...Rxd6. But now the rook has left its post and we can go 20. Qe8+!. King of course escapes to safety with 20...Kh7 and now the reason we "sacrificed" the rook - the e4 square, which used to be occupied by the queen, can now be occupied by the knight, thus forking the queen and rook and even if the queen goes to d8 to protect the rook and attack my queen, the knight will take the rook all the same, protecting its queen and black's only response is Qxd6 leaving us a pawn ahead, a queen invaded, and an enemy king one check away from mate. 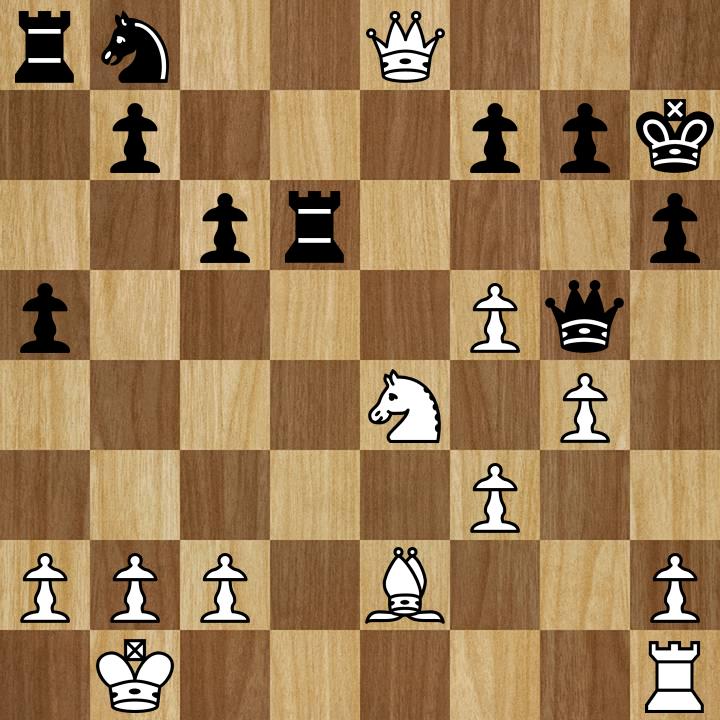 This unfortunately did not happen.. but I made up for it a couple moves later actually, utilizing a very similar idea. 19. h4, the pawn storm continues, and attacks the queen winning a tempo. Here my opponent had a chance to quickly stabilize with 19...Qe7 and trading queens, but probably like me they were attached to their queen. Instead they played 19...Qf6?! and here is where I saw the line that made me choose this game to analyze this week. 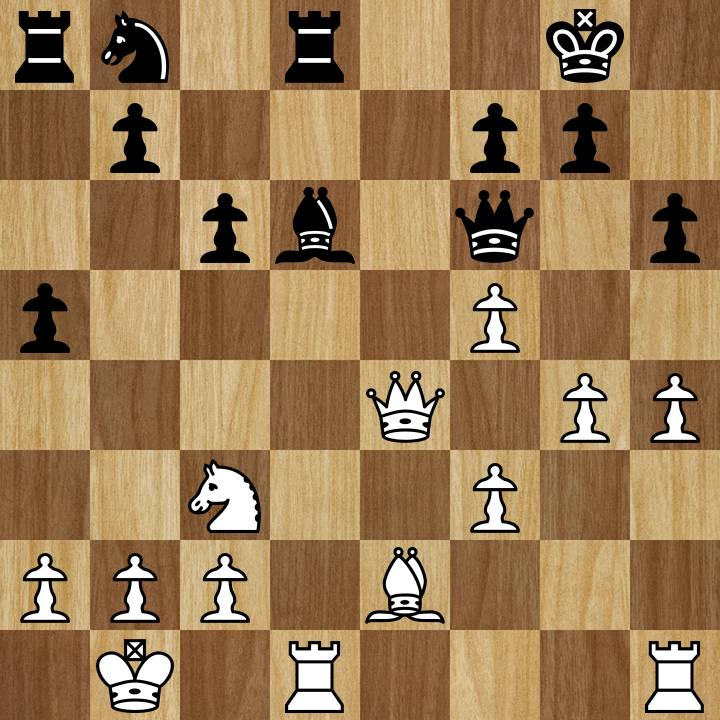 It starts with 20. g5 and here my opponent has one last chance to play Qe7 to prevent total chaos. But I think my opponent saw what I saw, which is after 20...hxg5 21. hxg5 Qxg5 they are just up a pawn. Which is true. But I have quite good compensation for this lost pawn: my rook is now staring down the open h-file, cutting off the enemy king's escape, and the enemy queen has left the defense of the bishop on d6.

In any case, after 22. Rxd6 my opponent not sensing danger thought for two seconds, took my rook, and lost the game. 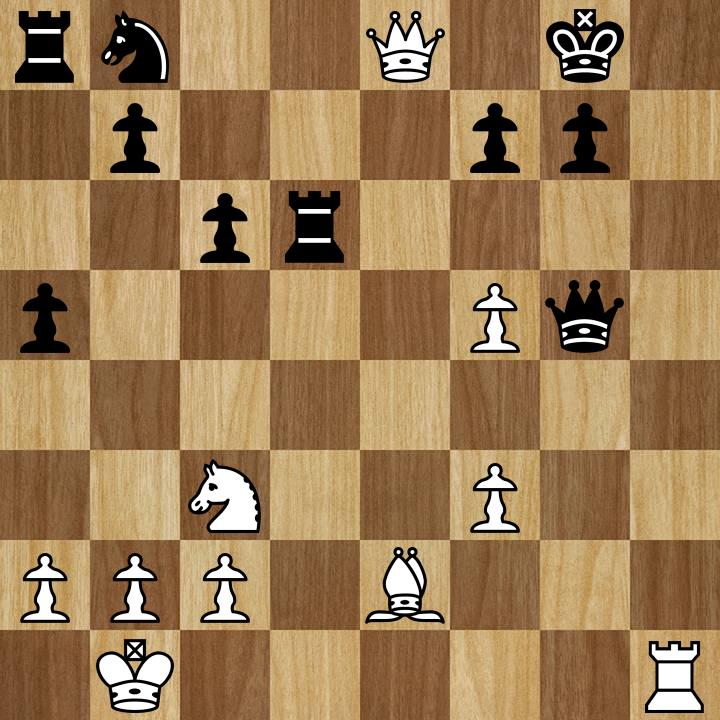